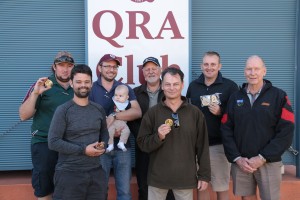 Some of the IDRC members who competed in 2017 QRA Queens.

2017 QRA Queens was a blast… quite literally. Starting Thursday 16th of August with a scorching top of 33 degrees, The shorter ranges were hotly contested. It wasn’t until late Friday that the scores began to spread as the heavy westerlies began to blow. Saturday brought with it no reprieve as the gale reached peaks of 50 km/h making 900 and 1000 exigent to say the least.

Thanks to those who were able to attend and we look forward to an even larger contingent of Ipswich Rifles in 2018.