The Ipswich Volunteer Rifles and Ipswich Rifle Club though forming the foundation of separate entities in their own right and purpose have origins which were inextricably entwined as eloquently outlined below by local historian Melanie Rush.

‘Potential dangers presented by the Crimean War (1854-1856) and the growing military might of Imperial Russia alarmed Queensland’s first Governor, George Bowen, enough to send reports to England recounting his fears that a single man-of-war could sail into Moreton Bay and attack the under-defended residents of Brisbane and Ipswich, as British red-coated soldiers had been withdrawn at the end of the convict era.[1]

A veteran of the Napoleonic Wars and the Battle of Waterloo, Colonel Charles Gray, the Police Magistrate in Ipswich, took up Bowen’s calls and held a meeting to establish a rifle club which could form the basis of a volunteer corps.

The First, or Ipswich Company of the Queensland Rifle Brigade was gazetted on the 26th May 1860, being renamed in 1863 as No 2 Company, as a Brisbane company formed soon after.

By the end of that year, No 2 Company consisted of three officers, one surgeon, a staff sergeant, four sergeants, three corporals, a bugler, and 54 rank and file members.  By the end of 1864, and with the assistance of public subscription and fund-raising activities, the Volunteers were able to form a brass band, which debuted at the annual Separation Day rifle match of that year.

The Volunteers formed three groups: Rifles, Light Horse, and Artillery.  They were subjected to military training at the Milford Street Drill Hall, with regular drill practices, parades, encampments, and were involved in ceremonial events.  Along with a government issued rifle and ammunition, troops were also issued with uniforms.[3]

Pride was strong, with some members of the unit using their volunteer military titles in everyday life.[4]  The Ipswich Volunteers also joined other units, camping at Sandgate, Eagle Farm, Fort Lytton and, closer to home, Redbank.

Following an 1878 camp at Sandgate, for 670 men and 60 cadets, the Ipswich Volunteers defended Breakfast Creek Bridge in a mock attack by the paddle steamer Kate.  The only active service the Volunteers saw was during the 1891 Shearers’ Strike, with the Ipswich Mounted Infantry mobilised.

With Federation came the nationalisation and professionalization of the military.  No longer were citizen soldiers required and those who enjoyed the shooting matches more than drill practice were able to transition to the rifle clubs, whose focus was on sport, not defence.’

The public perception of the Volunteer Rifle Corps must have been varied as the historical artifacts below clearly show.

A poem for the Ipswich Volunteer Rifles 1859 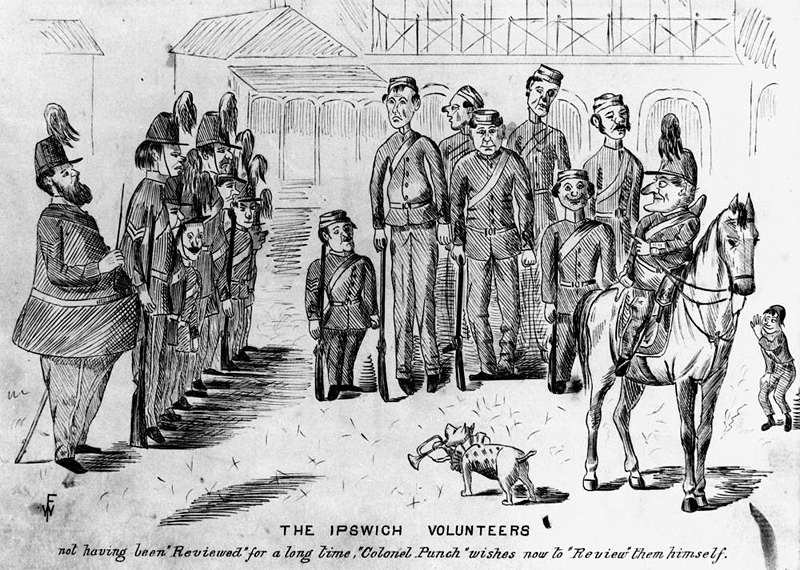 Parody of the Ipswich Volunteer Rifles 1866

The artist suggesting that the newly formed Ipswich Volunteers are a disorganised group of volunteer soldiers.